Protests against US Forces in Okinawa


May 18 at 2:24pm
This is not from Okinawa people. It is related to the comfort women statues and so forth. This is coming from the communists, and in particular from China.
This is part of a much larger information war being waged by China against Japan and the United States. China is also trying to stir up problems for us in Hawaii. It is all hidden in clear view. 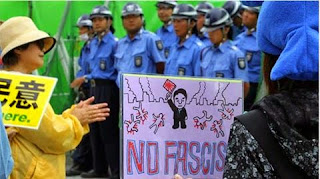 Posted by MichaelYonJP at 10:02 AM

I am disappointed at Hayao Miyazaki and Haruki Murakami. They dont know anything about the reality.

Those protesters are no Okinawa residents. They are remnants of extreme leftists of 1960s and 1970s visiting there from Honshu Island.

If you take pictures of these people, you can easily find the same faces in any protest demonstration in Okinawa. Everybody knows that Onaga, Governor of Okinawa, is an anti-Japan & anti-America. He is a real panda-hugger.

Mr.Shigeharu Aoyama, very famous fair person, said on his radio in Channel SAKURA, PRC suggested that Mr.Onaga, the incumbent governer of Okinawa, will be the first governer of the People's Republic of Okinawa(PRO), when it become independent. Such suggestion means, the PRO must be a despotic one without any election.