Selected articles from our archive. 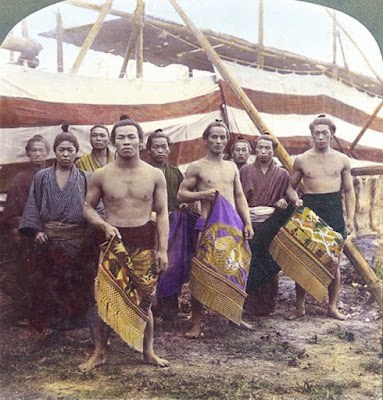 Amazing 3D photos from 1850s Japan
It was 1853 when Commodore Perry threatened to attack Japan if they did not open to a trade agreement. So this was a time when Japan was still really JAPAN in its almost pure form.
Remember that during this time frame we started to "invade" Hawaii in earnest. Like a python, arguably during the 1850s or so, we started seriously squeezing the life out of Hawaii. (I think the first major plantation might have been 1835, but I do not recall.)
We took Hawaii bit by bit using subterfuge, coercion, and outright power. Hawaii had been a sovereign kingdom. And finally in 1959 we completed swallowing Hawaii by making it a state.
We straight up stole Hawaii. No way around that one, and I don't want to give it back. (Making me a thief post facto.) Manifest destiny and all that. Kapu was over for good. Hawaii is our Tibet.
Today, China is doing a Sinofestdestiny (tm). 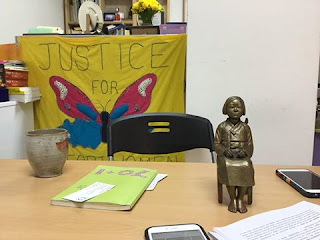 Korean Prostitute Statue --I made this photo with my phone at Chon Dae Hyup HQ in Seoul. They were selling even these tiny models. A giant scam.

Working on my Japan book today

Working on my Japan book today
It is amazing how much work goes into writing a single true sentence. But I found structural problems within this chapter and so print it to visualize it. (A trick I learned by accident.) 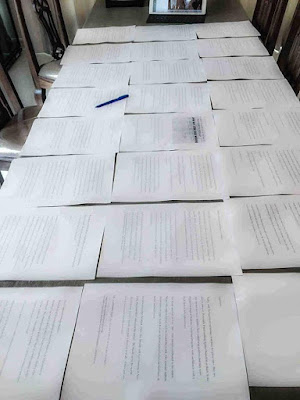 Posted by MichaelYonJP at 9:36 PM 3 comments: 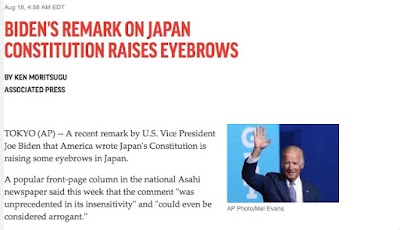 BIDEN'S REMARK ON JAPAN CONSTITUTION RAISES EYEBROWS
Should Japan have nuclear bombs?
This is complicated. First, yes, Japan should be fully armed. This will make China not wish to attack Japan. Second, no. The North Koreans truly are crazy, and we can destroy them on Japan's behalf.
Ultimately, yes. Nobody should feel they can touch Japan without a return letter from Japan. However…this will make ROK want the bomb.
If Japan gets the bomb, ROK will want it. And ROK can do it. And the Koreans go wild...
Japanese can go nuclear in a weekend. There are more engineers and physicists and mathematicians there than anyone can count.
And China can completely destroy Japan in minutes. China has been waging an information against Japan for years.
If your neighbor buys a gun, should you? Chinese have hydrogen bombs.

Posted by MichaelYonJP at 2:45 PM 3 comments:

We are no longer enemies. That was a short and bad time and it is over. 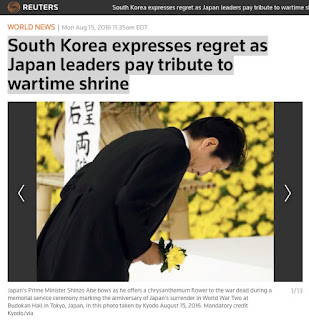 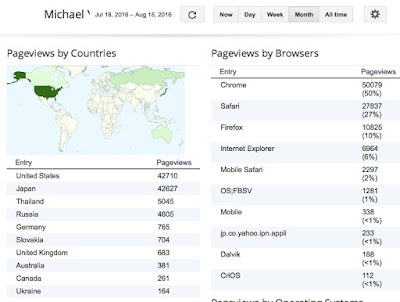 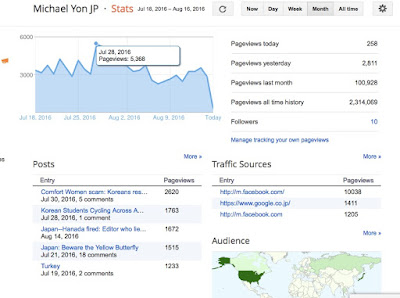 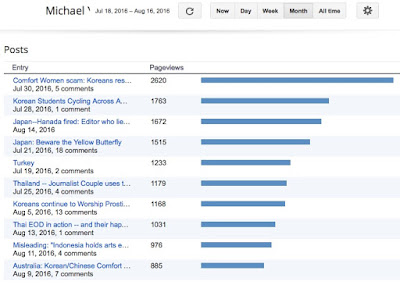 Posted by MichaelYonJP at 11:42 AM No comments:

Japan--Hanada fired: Editor who lied about me loses job 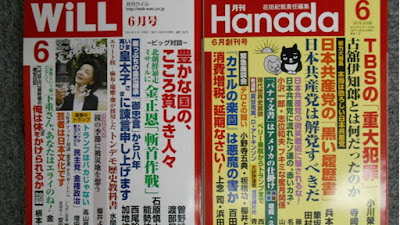 Japan--Hanada fired: Editor who lied about me loses job
Hanada did not lose his job for lying about me, but he did just lose his job. At one point, Hanada came on television in Japan saying I was flying first class. He lied. Got caught. Never apologized. Now must live with it. I never have flown first class, not even one time. (But would like to.)
Hanada is a political animal. His information literally came from a woman.
Apologize, Hanada. You will be better in the long run.

Posted by MichaelYonJP at 3:47 PM No comments:

Thai EOD in action -- and their happy bomb dogs 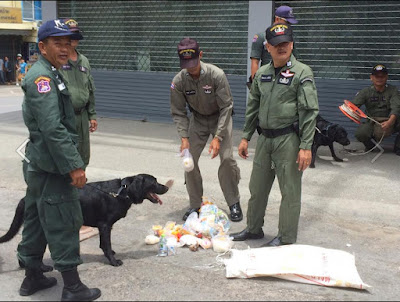 Thai EOD in action -- and their happy bomb dogs

Just yesterday many people were thanking Thai EOD, and then we have these latest attacks reminding us of the importance.

Side note: many people are blaming CIA as if they are involved in this. There is no evidence of CIA involvement. These are fantasies. Many people probably do not realize that the United States has helped Thailand with bomb dogs. Some of these dogs actually are from America, trained in American dog school to help Thailand fight this problem.

That's right -- the dog in this picture might have an American passport. (Well, they probably did not give the dog a real passport.) I can ask my EOD friends if this dog is American.

We also have a bomb problem in America, so the dogs are very important.

I only know this about the dogs because one day I visited the bomb dogs in Bangkok at the police station. The police take very good care of the dogs.

EDIT: An EOD person just told me that this is a BATF program. So they fly the Thai dog-handlers to the school in Virginia (USA) and they go through training with the dog and have time to bond. An American veterinarian flies to Thailand twice per year to check on the dogs.

So this dog in the picture might actually be American! (Maybe it understands English and Thai.)
Posted by MichaelYonJP at 1:08 PM 1 comment: 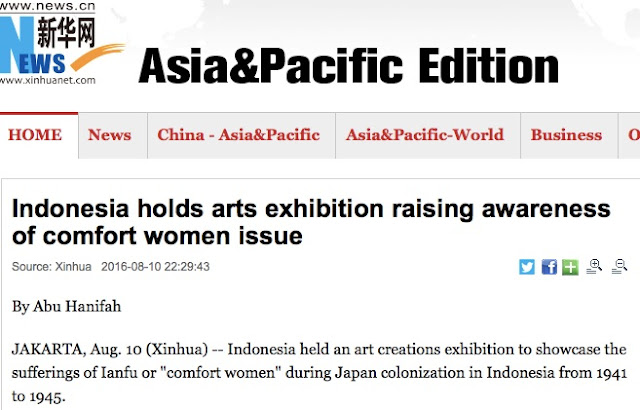 “JAKARTA, Aug. 10 (Xinhua) -- Indonesia held an art creations exhibition to showcase the sufferings of Ianfu or "comfort women" during Japan colonization in Indonesia from 1941 to 1945.”


Misleading: "Indonesia holds arts exhibition raising awareness of comfort women issue"
Indonesia is very pro Japanese for various reasons. Firstly, Japanese helped with Japanese blood to free Indonesia from centuries of brutal Dutch imperialism. Japanese beat the Dutch like a dusty carpet, and sent many Dutch survivors to Thailand to work on the death railway. Their graves are still there -- I published photos a couple times.
Japanese committed war crimes at the death railway. This is a fact. But the war crimes against Dutch were not against innocent victims hauled up from other places. Dutch, as example, were committing crimes in Indonesia. Two wrongs might not make a right, but there were no innocent victims. (There were innocent individuals, but on a national scale, there were no innocent parties.)
Dutch also made a massacre in Indonesia even after WWII. Am not pointing fingers, just turning on the light.
Japanese are actually buried -- with Muslims no less -- in the Indonesian national cemetery in Jakarta. I was there in the cemetery last year and saw the Japanese graves. Was not allowed to photograph, but the graves are there.
Muslims normally do not want non-Muslims buried with them (and some of the Japanese were Christians), but in this case, the Japanese are heroes to Indonesia and are buried with Muslims. Go see for yourself.
And while there, go see Obama's primary school not far away, also in Jakarta. Very nice neighborhood.


Australia: Korean/Chinese Comfort Women Scam continues
Dear Sir/Madam,
We were dismayed by the anti-Japan Korean activists disobeyed the conditions set by the Council to hold a comfort woman unveiling ceremony.
We re-clarify our stance on this matter for your reference.
Regards
Tesshu Yamaoka
President, Australia-Japan Community Network 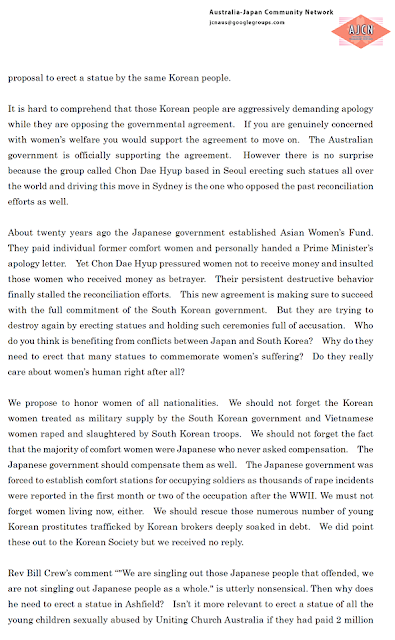 Posted by MichaelYonJP at 9:35 PM 7 comments:

"Generations of anger over the use of sex slaves in war are spilling over in Australian suburbs. Korean and Japanese communities are split over plans for a statue to honour comfort women." 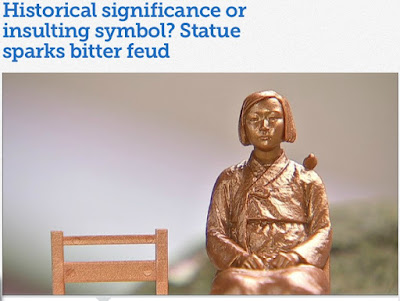 Koreans continue to Worship Prostitutes whom they treated as Dirt for many Generations
There are no greater stars in Korea these days than the prostitutes (still prostituting but in a different way) who claim to have been kidnapped by Japanese as sex slaves. Their stories all have been proven false.
Caveat: there were at least 19 real cases in Indonesia, and I think possibly 15 in Burma. (Not confirmed, but seems legit.) A handful in Philippines. Again, details sketchy.  But the idea that 200,000 to 400,000 were kidnapped as sex slaves is a huge lie. Never happened. This is a fact. I traveled to 11 countries researching this issue. Simply did not happen. Any journalist who repeats that 200,000 were kidnapped is just parroting and is clueless and should be ignored. They have no evidence.
I researched in Malaysia, Indonesia, Myanmar, Taiwan, Thailand, Australia, Japan, USA, Philippines, China, S. Korea.
Posted by MichaelYonJP at 1:57 PM 13 comments:

Posted by MichaelYonJP at 6:14 AM No comments:

Korean Mental Health -- Hwa-Byung: Angry Korean disorder
Interesting:
"The purpose of this paper is to review Hwa-Byung, a cultural syndrome specific to Koreans and Korean immigrants. Hwa-Byung is a unique diagnosis and differs from other DSM disorders. However, Hwa-Byung has frequent comorbidity with other DSM disorders such as anger disorders, generalized anxiety disorder, and major depressive disorder. There are several risk factors for Hwa-Byung including psychosocial stress caused by marital conflicts and conflicts with their in-laws. Previous interventions of the Hwa-Byung syndrome were based primarily on the medical model. Therefore, based on previous research, we present a new ecological model of Hwa-Byung. We also recommend some areas of future research as well as present some limitations of our ecological model. Finally, we discuss some treatment issues, particularly for Korean women in the United States."
Importance of Studying Hwa-Byung
"Korean immigration to the United States has sharply increased over time. The national figure is approximately 1.7 million people, making Koreans one of the largest Asian groups in the US (Census Bureau, 2010). The rapid growth of the Korean population in the United States underscores the need to consider their mental health needs and the sociocultural factors that engender them. In spite of the growing mental health needs among this community, Koreans in America (both American-born and immigrants), tend to underutilize mental health services, and particularly those individuals with Hwa-Byung (Kim, Lee, Chu., & Cho, 1989). There are several reasons why Koreans in America who suffer from Hwa-Byung may not utilize mental health services for their benefit. Although Hwa-Byung patients are aware that their illness has psychogenic origins, these patients are unlikely to seek treatment by a psychiatrist or psychologist (Park, Kim, Kang, & Kim, 2001). Hwa-Byung patients are more attuned to their physical symptoms (which are socially acceptable), rather than their psychological symptoms (which are not). Thus, when they suffer from psychological distress, they are more likely to seek help from traditional medicine (herbal medicine) doctors, Chinese medicine doctors (e.g., acupuncturist), and shamans (Park et al, 2001) or rely on various drugs that manage their physical symptoms (Rhi, 2004). Koreans and Korean Americans also attempt to deal with their problems by relying on informal support from their family or close friends rather than seeking professional help from mental health services. Talking to mental health professionals about psychological problems may be viewed by Korean or Korean Americans as bringing disgrace to the family (Park et al., 2001). This cultural belief may lead Koreans or Korean Americans to seek mental health services as their last resort. Lastly, Koreans or Korean Americans underutilize mental health services because they are socialized to internalize stress and repress feelings. In addition, they may be socialized to believe that psychological problems are the result of a character flaw with negative mental associations and a lack of willpower which are shameful; therefore they must resolve the problems on their own (Lee, 1997)."

Posted by MichaelYonJP at 3:21 PM 5 comments: