In one Package: Hunger Strike, Fasting, Tiananmen Square Massacre, Hong Kong
Am considering going back to Hong Kong in a few days. Chances of another protest on Sunday are high according to some sources there.
Meanwhile, am reading again about Tiananmen Square. This is a good subject to study for various reasons.
For instance, much earlier, I studied the Tiananmen Square massacre because our research team noticed that the "comfort women" and Nanjing massacre and other information campaigns appeared to sharply inflect after 1989.
Our theory is that after the 1989 Tiananmen Square massacre, when the world fell on China's head for murdering the students, China began a massive deflection campaign.
We can see that in the early 1990s, China began supporting feminist organizations and invested heavily in the comfort women and other campaigns, such as sponsoring the "Rape of Nanking" book in 1997.
Basically, to take pressure off themselves, China said, "Hey, what about Japan over there!?" And everyone said, "Yeah, what about Japan over there?" Jedi mind trick. Really worked, too.
People stopped talking about China massacring the students yesterday, and started talking about Japan 50 years ago. Jedi mind tricks are awesome.
Tiananmen still bites China. And hunger strikes really do work. (Despite that I posted numerous times about a rather silly/faux hunger strike I recently saw in Hong Kong.)
When Irishman Bobby Sands did a real 66 day hunger strike and died at the end, he became an authentic martyr. After all, when someone is so motivated and sincere that he goes 66 days without food, and dies at the end, we know he's not just some loud mouth attention grabber. He was sincere to the death. A true martyr willing to fling his own body at his enemy. Got to respect that. Total kamikaze. Team player. (Am I the only American who respects Kamikazes and always have?)
Zhang Ming was similar. A student leader at Tiananmen Square. A true believer. Off to prison. Serious hunger strikes and on and on.
Zhang did not die, but his pains sure got a lot of press, which you can see online: "China: hunger striker Zhang Ming in critical condition"http://www.omct.org/urgent-campaigns/urgent-interventions/china/2004/04/d16834/

So, I am reading this next book on Tiananmen Square looking for clues on how to beat the Chinese Communist Party, and the author started writing about Zhang Ming.
Apparently, after much torment and hunger striking, Zhang was released, made a lot of money, had some more dramas, but ever since the hunger striking in prison, Zhang is a life-long faster. He fasts. Milk fasting.
Which is very strange and brings back some memories from India and Nepal of some dude called Milk Baba. I think he told me he drank nothing but milk for like twenty years. I don't recall, but might be in my notes. Well, who knows. In that part of the world I don't believe much.
But this author, while interviewing Zhang Ming -- she is really funny. She is interring Zhang and starting to get hungry, and her interview is going very great but Zhang is not hungry and she is starving, and he encourages her to eat but she does not want to eat in front of him because she thinks it would be rude, lol.
As someone who fasts, I don't find it rude at all when someone eats in front of me. I am the opposite. I sometimes feel uneasy that I am being rude by not eating.
Anyway, that part of the book is pretty funny. I am only in chapter three and so cannot make recommendation yet, other than the book is good enough that I will proceed to chapter four.
Bottom line: there is value in spending at least a few hours to read about Tiananmen Square. This massacre and what happened to China as a result is an important inflection point for various reasons and thus is worth the few hours for familiarization.
Many people are asking when China will attack the students in Hong Kong like they did in 1989. But what happened to them after 1989 was pretty bad for China. They know that if they murder a lot of Hong Konger students in 2019, we are going to hit the roof. We could totally cut off trade with China with one tweet, not to mention what EU and other countries could do.
The outcome for China could be economic devastation. Nobody knows. We can only guess, but everyone who is paying sufficient attention realizes that China is not showing restraint because they are nice guys, but because we might come at them with a machete and a crazed look in our eyes.
China realizes that our response to another massacre could be irrational and wipe out the Chinese Communist Party. (And thus be somewhat rational. There can be some rationale in being irrational.)
But here it is: Fasting. Hunger striking. Tiananmen. All at same time, in chapter 3.


Am not going to publish more than this part due to copyright law: 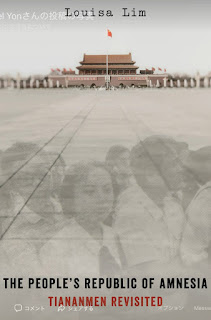 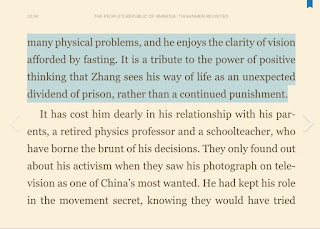 Posted by MichaelYonJP at 5:07 PM No comments:


The Dragon-Wolf in Nepal: "Nepal stops Tibetan refugees from celebrating Dalai Lama's birthday"
Tibetans ran from the Chinese-wolf and mostly abandoned Tibet. Now the Chinese pursue them because wolves always pick off the weakest first. Sorry...but I don't wave Tibetan prayer flags and chant about their wisdom and holiness.
We sponsored a resistance (Khampa people) and even trained some in Colorado. I first came across the story when I was deep in Nepal in 2002. Back then, the story was not well known. Today, you can find plenty online and there is a documentary that I bought during my last trip to Kathmandu.
Parts of Colorado look like Tibet -- I've been to both the area we trained them in Colorado, and to Tibet -- they do look very similar.
But we canceled that support when Nixon was smooching with China. In a nutshell (a thin shell), we were using Nepal sort of like -- vaguely speaking -- we used Pakistan to support Muj (not Taliban -- do not confuse Muj with Talibs) against Soviets during the Russian (USSR) war in Afghanistan. Again, that is a very vague approximation. CIA people who were involved may toss yellow caution flags on my quick generalization, but that is approximately a good comparison.
Fact is, Dalai Lama ran away from the Chinese wolf. He prayed for Americans to fight his fight. Tibetans ran to India, and I went there to where they stay as well. And too Nepal. And I went there to India, Nepal, and Tibet, and spoke with plenty of Tibetans.
Some fly prayer flags in USA and Europe. Some Americans like to pretend to be enlightened because they know some Tibetans and have a singing bowl and some pretty flags. I've got the flags and bowl, too. Nice and pretty. But they don't kill Chinese soldiers.
Americans are not going to fight for Tibet or people who do not fight for themselves. Lesson there for Hong Kong and Taiwan. If Taiwan and Hong Kong put up sufficient fight, Americans have much leverage to bring to bear and support. And a lot of us believe Taiwanese and Hong Kongers are worth fighting for and beside. I am one of them.
Tibetans ran from the wolf-dragon. And now the predator follows. That is what predators do. You run. They pursue.
As for Nepalese, China will take Nepal inch by inch. Generation by generation. They will breed you down into oblivion and into minority status. Give the Chinese 50 years at this pace and Nepal will be another Tibet. Watch.
We must crack CCP now.
You Nepalese Maoists are fools to roll out the carpet to Chinese communists and to allow them to pursue Tibetans in Nepal.
Chinese will eat you all in Nepal. 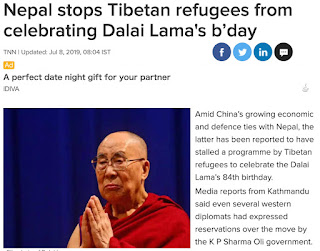 Posted by MichaelYonJP at 11:50 PM No comments: