Assumption might be one of the most common and dangerous thinking errors. We see it every day, and sometimes we even do it by accident, and assumption leads to accidents every day, often with lethal consquences.
Certain types of people never should assume anything lest their reputations be ruined, or they get killed or kill someone. These include scientists, medical professionals, soldiers, and writers.
Among British and US combat troops -- anyone who engages in assumptions damages his reputation and undermines trust from superiors and subordinates. Scientists who make assumptions will be laughed down the road. Doctors who make assumptions can kill people, and the same is true with soldiers. Writers who assume often do not last long. Serious readers will laugh them down the road with the scientist.
One of the first things taught to me in the Army was that when you assume, you make an ass out of u and me. Never assume. Know what you do not know. And until we train ourselves never to assume, we might not realize how easy it is to assume. (If you assume in the Army, you WILL be reminded and chastised, at minimum.)
Now, often we do not know important things so we form opinions based on what we do know, or scientists form hypothesis. Military commanders typically make most of their bigger decisions with (very) imperfect knowledge and they must use their experience to make guesses and estimations, but the good commanders never assume. They know what they know, and they try hard to know what they do not know.
I mention this because every day massive assumptions appear in my Facebook comments section.
For instance, the accusation of deleting comments is common, and this accusation came in again today.
There have been thousands of comments today and I have deleted precisely 0. No comments have been deleted today.
I do not recall the last comment I deleted, but the number surely would be fewer than 1 per 1,000. It is probably fewer than 1 per several thousand.
Generally if someone makes a comment that needs to be deleted, he probably needs to be blocked.
The blocked list is very elite. Likely only 1 per several thousand readers is blocked. If a real count was made not just of friends, but of random people who comment who are not friends, I'll bet the blocked list is more like 1 per 10,000. I do not know. And I know that I do not know, but I do know that it is an elite list to be on.
But someone might make a comment and it vanishes, and then I get a message, "Why do you delete comments that disagree with you. My comment disappeared." Thinking error: Assumption.
Firstly, I sometimes comment and they seem to vanish. I have no idea why. Maybe it is a Facebook quirk. I do not know. Secondly, there are thousands of comments up that disagree, including many today. Disagreement is normal and healthy when needed. We often learn from disagreement.
But to assume that I deleted the comment is a thinking error.
The commenter only knows that he THINKS his comment has disappeared. He might be wrongly thinking that his comment disappeared, and this is common on my Facebook page.
Often people think they know their comment disappeared but in reality it did not disappear.
Please notice that my Facebook often has an English version and a Thai version, using the same image. So I might publish something in English, and someone comments, and then checks back three hours later and thinks her comment disappeared.
But in reality, during that three hours, our gracious Thai translator put up a Thai version, using the same image.
So when the commenter comes back, she sees the familiar image but misses the fact that this is a translated version and a separate post. There are two comment strings.
One string will mostly be Thai under the translation, the other string normally mostly is English.
It is easy to get mixed up, and then leap to an assumption.
These posts look similar today, but they are totally separate: 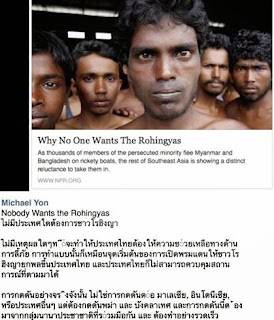 Posted by MichaelYonJP at 9:57 AM