「(here are the first few sentences of the comment)

If Japanese did this, we would call them War Criminals and hang them:
Comment on my Facebook from Charles E. DiSipio
"The combatants in WWII, in this instance, the Americans and our Allies, conducted what has become known as total war. Nothing was off the table: enemy combatants were mutilated, tortured, summary executions performed on wounded and those immediately taken prisoner, heads displayed in a variety of ways (typically of dead Japanese), and civilians killed by the tens of thousands via bombing, etc. Some of these acts were indeed gross excesses, but in the big picture, that's how WWII was fought and won (and the press and the high brass swept as much of this as possible under the carpet), and I've never interviewed a veteran from WWII who felt any guilt about the way we prosecuted the war. My father's task force passed several hundred Japanese sailors floating at sea whose ship had been sunk and every U. S. vessel was ordered to depress their guns to the lowest elevation and fire into the human mass as they passed by. Dad, to this day, feels absolutely nothing about that event, saying that everyone on his destroyer just did their job knowing the enemy would have done the same to us in a similar situation. What mattered was winning at all costs, and that we did. You can indulge a sense of remorse, if you choose, and go back to being civilized once your enemy has been unequivocally obliterated and has lost all will to resist."

===
I republish this comment without judgement. Simply an observation for reflection. 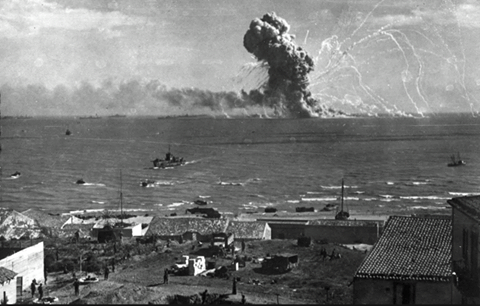 Posted by MichaelYonJP at 11:25 PM

The war makes human mad even after finished. But there are some good story even in the madness. Please check.

Mad guys may enjoy happy life and will get together at the hell finally, I guess.


"If we'd lost the war, we'd all have been prosecuted as war criminals."
-Curtis LeMay

I believe all countries that exist today , experienced some sort of war in the past. History is history.

Did we forget about Hiroshima, Tokyo...? No
Did we forgive the Massacre ? Trying very very hard.
Why? Because we can't live in the past.

In Japan, as a proverb says
" There are two holes (to hell) if you curse someone."
....Curses return upon the heads of those that curse.

I like this one
"People [Those] who live in glass houses shouldn't throw stones. "

Thank you for your introduction. I have heard a similar episode about the US Navy destroyer in the Philippines, although situation was different because it's in combat.
For many years, I was wondering about that I had never heard the end of the Japanese army's numerous atrocities in the World War II against foreign countries even have praised their fair behavior in Sino-Japanese War Russo-Japanese War.

It was neither diabolical nor divine.

> I have heard a similar episode about the US Navy destroyer in the Philippines,

Sorry, just in case... According to Wikipedia, it is “A survivor saw the Japanese captain salute her as she went down”. But in my memory in addition to the above, the crew of the Japanese destroyer, maybe Yukikaze, threw life preserver for survivors of Johnston.

This is not what Curtis LeMay exactly said word-for-word as I have no time to look up the book right now, but he said in his deathbed:

“I was born in a barbaric age Humans solve a dispute with sticks, and I just did my duty.”

All the issues on the WWII that are recurring on the political/diplomatic scenes today, such as comfort women, Nanking Massacre, war crimes, A-bombs, etc., go back to the nature of the 1946 International Military Tribunal for the Far East (“Tokyo Tribunal”).

Except a few pro-China/Korea ideologists, most of the Japanese consider that the Tokyo Tribunal was an unjust vengeance of the victorious allies inflicted upon the loser.

Until 1946 Tokyo Tribunal, there had been no concept of the “war criminal.” There were leaders responsible for a war. But there were no leaders committed a war crime. Therefore, the concept of the” war criminal” itself is part of the “retroactive law” that does not exit in the modern laws of any modern nation.

Frankly speaking, from a viewpoint of Japanese, Franklin Roosevelt, General George Marshall, Truman are all war criminals that should have been hanged, if we had won the war

Now, there is a big question. Do we still live in an age humans solve a dispute with sticks?

The answer must be YES. We can watch many battle scenes on the Youtube while enjoying potato chips and coca-cola.

Another question is “why the history is important?” Many history books are sold and many are eager to read the books. But why? As a self-proclaimed student of history, I would say “we learn history: 1) to know your nation, since the history of a nation is the nation itself; and, 2) to prevent the future war, as possible as we can.”

Therefore, it is very important to look back what had happened in the WWI and the WWII and review the soundness of the Tokyo Tribunal, in order to prevent the future war since the future war will be a nuclear holocaust.

However, I believe there should be an important consent for such review. No one has the right to accuse somebody saying, “You did this and that. You are the descendants of the war criminals and you owe a huge debt to us. Therefore, you should obey what we say to you” as Chinese and Koreans often say to us.

The Treaty of Shimonoseki was signed on 17 April 1895. China recognized the total independence of Korea. Before this tready, Korea was a tributary state of China.

If Japan did not fight with China or Russia, Korea could be like Tibet until today.

They are sanctimonious hypocrites.

As I often say, “Nanking massacre” is the false propaganda as I prove in the following website.

Was Pearl Harbor Attack really an unprovoked attack? It seems Franklin Roosevelt was surrounded by Soviet spies who were trying to drag the US into the world war.

I need more detailed study on this topic, but the history tells us that Japan’s 500,000 troops were pinned down in the Chinese Continent as the result of never-stopping provocation of Chiang Kai-suk’s KMT forces against the Japanese Army and people in China in 1937.

Russia’s traditional war strategy was to draw the strong enemy far into their own territory as Napoleon was trapped in 1812. I suspect that Stalin used the traditional strategy of Russia against Japan. But he used China in 1937 instead of Moscow in 1812.

He bought time to prepare for the war against invasion of Hitler’s Germany, and then next to destroy was Japan. The best way for Stalin was to use the industrial power of the United States against Japan.

Have any of you watched the Japanese movie Orochi(雄呂血) ? It is the story of a honest young samurai trapped in the sinister schemes of old men with power and authority.

The cunning old men know very well how the young samurai would behave if he was humiliated. The movie starts with the following words:

This world is more complex than you think.