Iran: Real Americans are not impressed with the "Death to America" psychosis, and trivial crowd response to the death of CIT (Chief Iranian Terrorist) Qasem Soleimani. 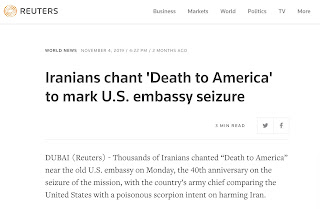 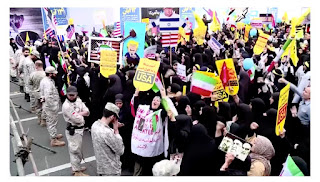 Iran: Real Americans are not impressed with the "Death to America" psychosis, and trivial crowd response to the death of CIT (Chief Iranian Terrorist) Qasem Soleimani.
CIT Soleimani and the foreign adventures of the medieval jihadists who have stoned their way to Persian Power, is dragging "Persia" into war.
Folks who have followed my work for years have some idea how much war I have seen, and how many protests around the world I have ventured into. These years have brought a few lessons that are important at this moment.
I have been looking at photos and videos from the ceremonies around for CIT Soleimani. They are small. Maybe in the few thousands at most.
Important: when protests are huge, media ALWAYS -- in my experience -- publishes huge, wide angle shots. Drone footage, that sort of thing.
Surely the Iranian Ministry of Persian Islamic Stoning, Jihad, and other Cult Bullshit, could have reached deeper into the water well to find more persuasive footage.
Photographers, videographers, editors and publishers, generally like to fill the screen with the action. Folks who follow my live streams from Hong Kong, for instance, have seen me point this out many times. Big crowds get wide angle shots. Small groups get tight shots. Flames of any size are camera magnets. Chanting "DEATH TO AMERICA," even if only a handful of stooges are at it, always makes great copy.
The Iran issue can go many directions.
The almost-worst case: Big war. Many people die.
Worst case is that this blows over and we do cripple the Iranian nuclear program. They eventually get nuclear weapons and Israel nukes them in advance. (If Israel actually has a few atomic bombs laying around.)
It's not America who is dragging into war. Nobody in the region likes Iran.
Iran must suck up to Russia and China for support. Like, you know, North Korea.
Iran is a rogue state on par with North Korea.
Hello Iran: We killed your CIT. Do something. Something big. Like attack one of President Trump's golf courses. We know you are stupid enough to do it.
The cult leaders shout down into the water well and listen for the echo containing war advice. It's telling you to poke the Eagle again. Just do it.
"Death to America" psychosis from November:

Posted by MichaelYonJP at 10:26 PM